This week I am learning/have learned about two things: the Lewis and Clark expedition, and chocolate. Of course I knew a bit about both to begin with (well, we could argue I knew a lot about the latter topic), but I wanted to learn more and I’ll tell you why.

Firstly, the topic of Lewis and Clark. This May we’re planning on visiting some states in the west, including Oregon. I am so excited about visiting the food stalls, Voodoo Donuts, various museums and breweries, and also…walking on the same trails as Lewis and Clark did! We’re starting to plan our trip, and I’ve been really big into the research involving Oregon. I’ve felt the calling to reread Stephen Ambrose’s Undaunted Courage, to watch random youtube videos about the expedition (see below), and to spend too much time on sites with interactive maps.

Secondly comes the topic of chocolate (*drools*). It came to my attention recently that a Japanese native named Susumu Koyama was awarded the title of Top Foreign Chocolatier by France’s Le Club des Croqueurs de Chocolat two years in a row. Koyama has a confectionary shop in Sanda, which is in Hyogo  Prefecture (we live in Kobe, Hyogo Prefecture), and one of my friends who lives near the shop says there are always massive queues of cars outside. Putting these bits of information together, I concluded that I must try some of Koyama’s chocolates before I left Japan!

Fortune struck with Valentine’s Day on the horizon. Department stores in big cities around Japan are stocked with various chocolates from the very best chocolatiers for the season, so once shops started their “chocolate events,” I was on a mission. I first went to one of the events in Osaka, only to find that the chocolates famous for winning the award were sold out! Luckily I was still able to soak in the artistry of all of the chocolates on display in the brightly-lit glass cases, to dream about the textures of the delights, and to sample a few as I walked around. Oh the joy!

Finally, I was able to procure the chocolates I’d been searching for in a department store in Sannomiya: 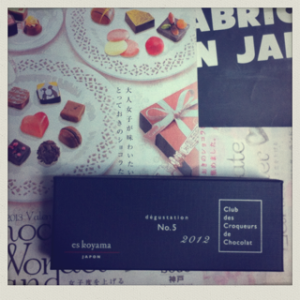 So now, the verdict.

We weren’t that impressed. Numbers one through three were nice enough–they had a harder shell with creamier chocolate inside. Number five, the Ninja Chocolate, had a taste like you might experience after breathing in campfire smoke too closely–like you’re chewing on a piece of soft bark, almost. They sure were pretty, though. And expensive *cough, cough* over 1500 yen *cough, cough*

Despite my disappointment, I feel like I might have to give Koyama another chance with some of their other chocolate selections. After all, they’ve kept the title for two years now, right? In the meantime, I think I’ll just stick with a good old Meiji bar.

What do you think? Do you know any cool facts about the Lewis & Clark Expedition, Oregon, or chocolate? Leave me a comment and let me know!