A couple months ago I came across a DIY project for a clock made out of a bicycle break disc that I decided would make a great Christmas present for Chad. A month and a half later, I totally forgot what part of the bicycle I was supposed to use, so I asked my brother-in-law if he could get a hold of “that one part of a bicycle that you wrap the chain around.” He was like, “You mean the gear?” And I was like, “Uh…yeah?” He got me a bicycle gear like I requested, and I was surprised to find there was nothing in the center to attach clock pieces to! I had requested the wrong part for the DIY with no time for mistakes. 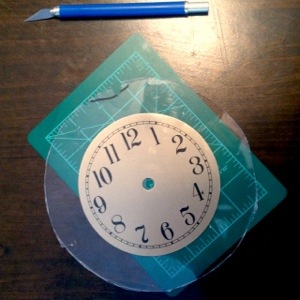 I tried to think of something good to attach behind the gear so that I could add a clock face and/or numbers and clock hands. I thought about getting a metal sheet, but that would involve also buying metal cutting scissors and the price of the project was starting to grow quickly. Instead, I opted for plexiglass, which the craft store employee said could be easily cut with an Xacto knife. (She was kind of lying. It was not easy, and the edges turned out kind of rough. Lucky for me, the edges can’t be seen because I measured the circle of plexi glass to be slightly smaller than the diameter of the gear). After cutting the plexiglass to size, I tested out the clock face so I could cut out a circle in the middle for the hands and battery.

Once again, I didn’t have to make the hole super pretty, because the clock face would be covering the edges of the hole. I tried using a hot glue gun to glue the gear to the plexiglass, but to no avail. This project seemed to be getting more and more difficult! Finally, I got some crazy glue, and that did the trick. 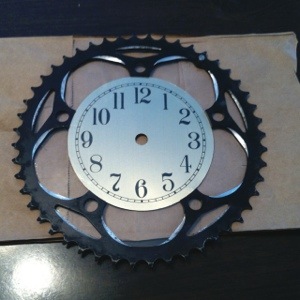 I glued the gear to the plexiglass base, added the clock face, and placed the easy-to-install clock parts.

Then, I mounted it on the wall! I was pretty happy with how it turned out, especially because despite the minor setbacks, it was a pretty easy DIY gift overall. The best part is that Chad likes it, too! Did you make any gifts or receive any handmade gifts over the holiday season?