“So you think it’s a hat I’ve got on my head? Not at all, dear boy. It all grows out of me. Just as your hair grows out of you. That should show you how glad I am you’ve finally come. That’s why I’m flowering and bearing fruit. If I were sad, I’d whither. But come now, don’t forget to eat.” –Dame Eyola

A couple of months ago we had a bad snowstorm in Michigan in which the wind was so strong the snow was blowing sideways. Looking outside, I was reminded of a scene from the movie The Neverending Story, and proceeded to do a little research on the movie. Come to find out, like many movies, The Neverending Story was first a book, and–as often happens–the movie strayed from the book in several ways. I decided to give the book a read, and enjoyed a light-hearted, imaginative tale.

When it came to thinking of a project to go along with the book, I thought I should try an oil pastel. It’s been ages since I’ve used oil pastels as a medium, and I thought they would be a good way to illustrate the colorful, dreamy world created in “The Neverending Story.” Initially, I wanted to do an oil pastel of the lion Grograman, also known as The Many Colored Death. Grograman changes colors depending on the color of the sand upon which he stands, and he is an important part of the main character, Bastian’s, journey in Fantastica. After seeing several cool renditions of Grograman online, however, I decided to change characters and instead illustrate the Dame Eyola. 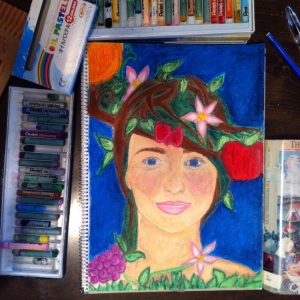 This was my first time trying oil pastel with a person as the subject, and I am pretty out of practice! But it was fun trying to bring the mother-like woman who looked like she was “wearing a broad hat covered in fruits and flowers” to life. In the book, Dame Eyola tells Bastian some kind words we could all use now and again. For example, she sings to him:

“Regardless whether good or bad,/you’ve suffered much and traveled far.

Later, Dame Eyola talks to Bastian about choices he’s made on his journey, saying, “You went the way of wishes, and that is never straight. You went the long way around, but that was your way. And do you know why? Because you are one of those who can’t go back until they’ve found the fountain from which springs the Water of Life…” (365). I liked this conversation because I think it can be applied to anyone. No one is perfect, and we all make mistakes. But we’ll get through it on the crazy path we make for ourselves, and there are people (perhaps not sprouting fruit from their heads and bodies like Dame Eyola!) who will help us on our way.