On my Summer Bucket List (and bucket lists past, for that matter), when I wrote “fancy night around town,” I generally meant that I wanted to dress up for no reason at all and do ordinary things–just for fun. But as I was researching dinners for our anniversary weekend, I came across a perfect reason for dressing up and NOT doing an ordinary thing: Michelin Star-Rated restaurant Chez Olivier.

After perusing the bilingual website and reading about Chef Olivier’s history and approach to his restaurant, I was especially intrigued by the presentation of the meals in the pictures, and at how the menu is always changing with the season based on what is available. Ever since watching The Hundred Foot Journey (a great movie, if you haven’t seen it!),  I’ve been curious about restaurants with the coveted Michelin Star, so I have to admit that was part of my reasoning for wanting to go, too. Since we went to Hakone on our anniversary weekend, this weekend was our chance to visit Chez Olivier with a Saturday night reservation for 6:30. 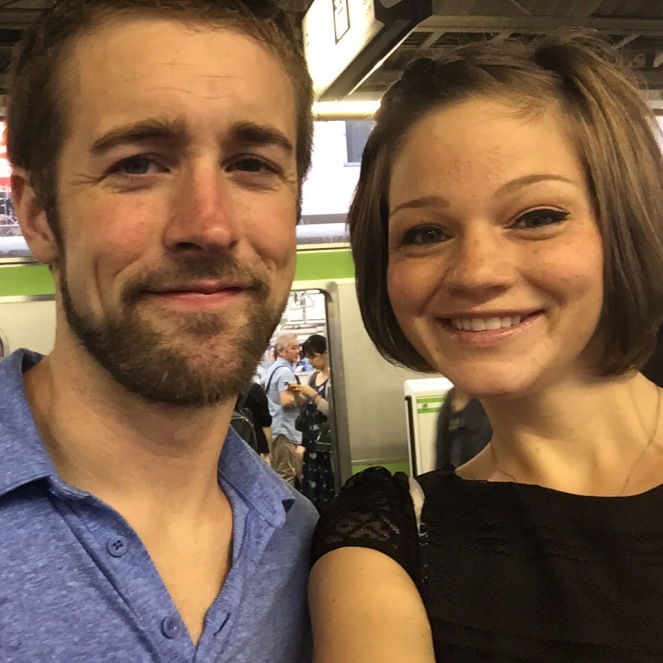 Weeeee! I was so excited!

Here is our table set for two before the meal began. This was the stage at which we learned our first lesson: be sure to specify you want TAP water if all you want to drink is water. The waitress (who was truly quite friendly) opened a bottle of Evian with a charge of 1100 yen and I think our hearts broke a bit with each pour.

We chose a dinner course with a starter, main and dessert. Before the starter there was a little complimentary appetizer of bread with bits of bacon and other flavors, a drop of soup, and a mussel with hazelnut and herb butter on salt. The waitress recommended we start with the soup (which was on the spoon in the middle), and it ended up being a delightful surprise. We wondered how it could be soup when it looked like a little mound of cheese or something, but upon putting it in our mouths, it burst open and filled our palette with really smooth flavor. So sorry I can’t remember more about the description of each item on this plate as she just told us briefly as it was served. The mussel was my favorite little bite.

Next came our appetizers. I chose the Gazpacho jelly with mozzarella, tomatoes, shrimp, and avocado, and it was just fabulous. The little swirls of green were the avocado, which really smoothed out the tanginess of the soup. We were also served complimentary bread (warmed) with fresh-made Hokkaido butter. We may have eaten nearly all of that butter by the end of the meal because it was so creamy yet light, and I have no shame about the matter at all. 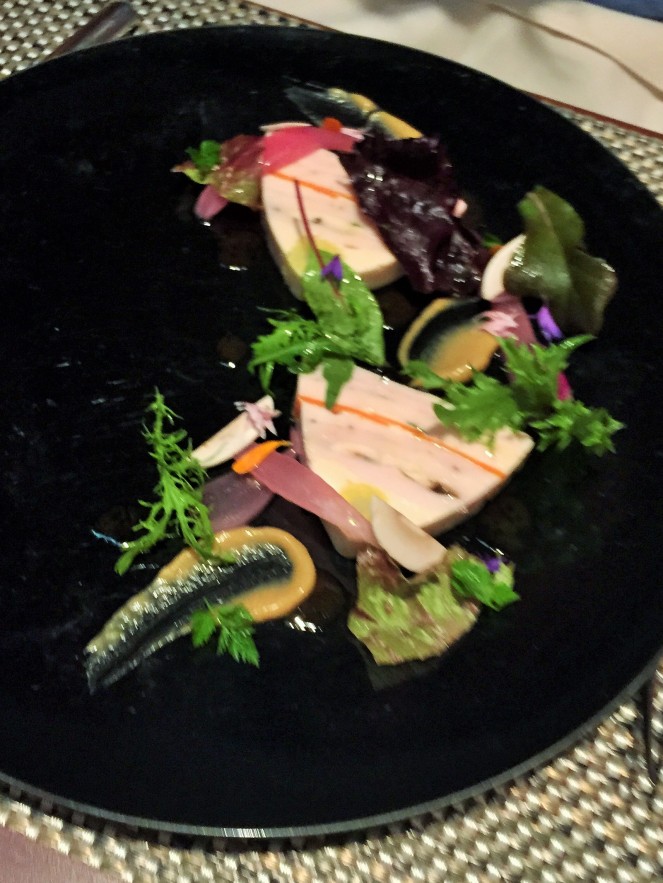 Sorry this picture is blurry, but this was Chad’s appetizer: Pressed chicken meat, rhubarb, acidulated red onions, and cooking juice. He gave me a bite, and his was also quite nice.

Next up was our main course, and both of us chose the roasted duckling fillet with cherry sauce and a creamy polenta. (Chad paired his with a nice red wine.) The duckling was imported from France and was just divine with the cherry sauce. And the polenta! It just melted in our mouths. Absolutely delicious. 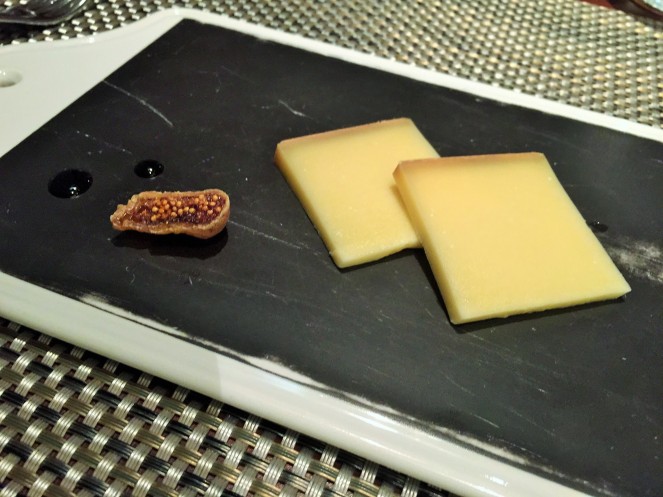 At this point, depending on how you look at it, we learned our second lesson of the night. We were brought a cheese platter and asked if we’d like some cheese. Chad chose a really nice blue cheese, and I chose Gorgonzola. Our slices were served with a bit of dried fig and a couple drops of balsamic vinegar. The lesson? Each serving added 800 yen each to our bill! On the bright side, we definitely enjoyed the cheese. 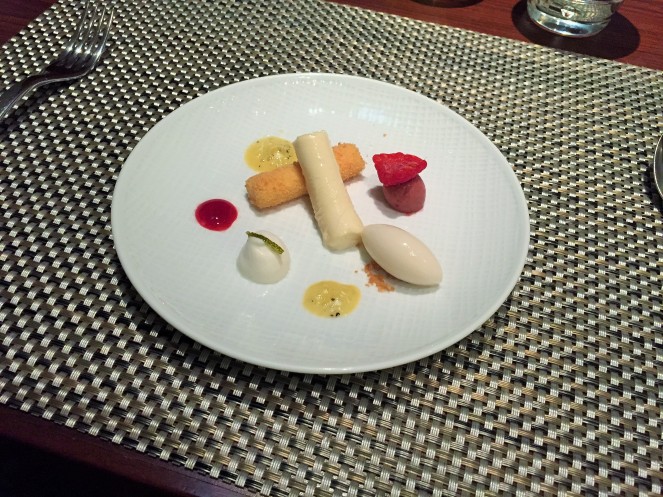 Next up was a complimentary pre-dessert of assorted cheesecakes. There was rare cheesecake, some cheesecake ice cream with a small bit of lime zest, a raspberry cheesecake, passion fruit sauce, and a couple other little logs of cheesecake. Each bite was soooooo delightful. If only I could just send you a bite or two! 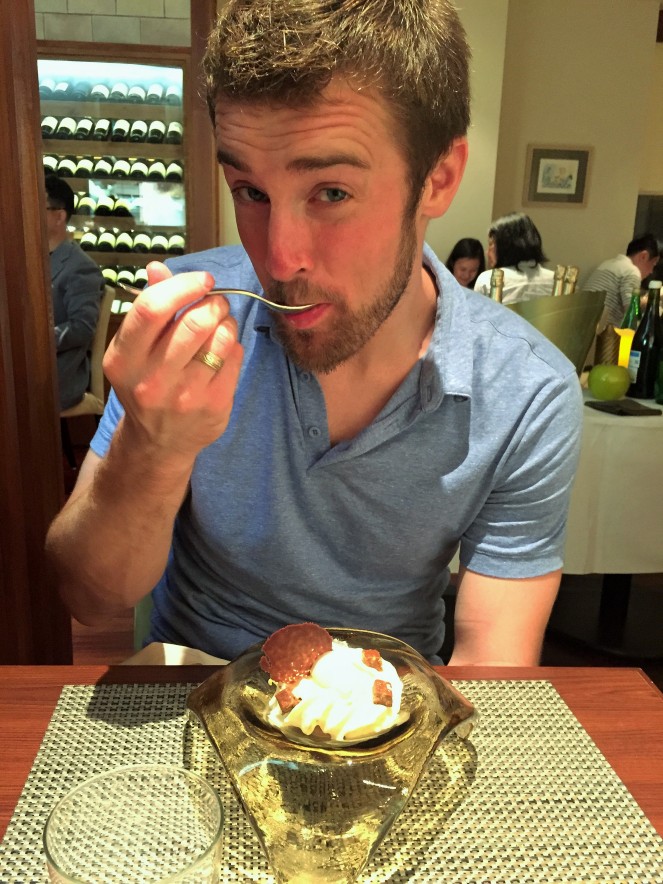 Next was our dessert. Both of us chose the Creamy Chocolate ”Caramelia,” mascarpone and maple syrup espuma (a gourmet foam or whip), crispy praline,  and milk ice-cream dessert.

The dessert was layered, and I enjoyed trying each layer individually, and then altogether. 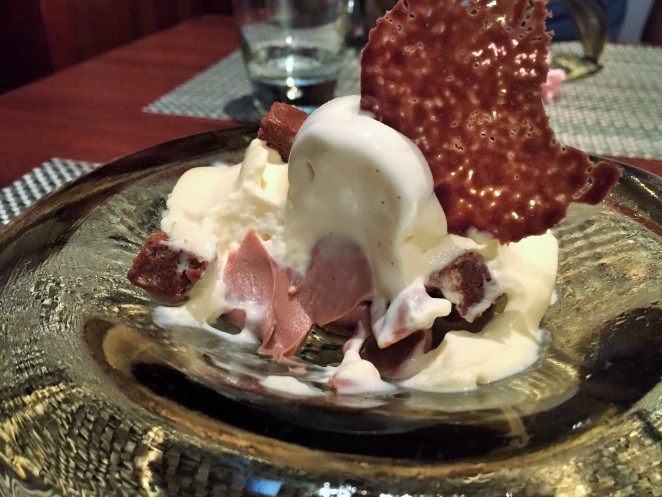 See the layers? Don’t you just want to dive in and disappear into chocolate caramel heaven?

Before our meal was complete, we were given two cannelés to share, a small sweet which actually originated in Olivier’s hometown of Bordeaux. The outside was crisp and honeyed, and the inside was soft and spongey with egg and rum-flavored crumb.

Overall, our experience at Chez Olivier was delightful. The courses themselves were 4800 yen each, but with the added expenses of the Evian water, Chad’s glass of wine, the cheese and a 10% service charge, we felt a sad little pang when receiving the bill. BUT! Here’s what we thought as we left: we learned a bit about dining fancy, we had an amazing time (we were there for about 2 1/2 hours talking and dining), and the food was just awesome. The staff was pretty friendly and helpful, and the atmosphere was nice. We definitely enjoyed our time, and will be trying more fancy places once in a while in the future.

Have you eaten anything amazing lately?