I mentioned I’ve started baking my own bread again, but did I also mention we don’t have central air in our apartment? That means it’s not always the best idea to have the oven going (even though I did make a mighty tasty coffee cake the other day in 90 degree heat!). Still wanting to make my own bread as much as possible, I decided to experiment with a recipe from The New Artisan Bread in 5 Minutes a Day that can be made in the oven OR in the crock pot. That’s right: bread in a crock pot.

The bread was made from the same batch of dough, so the taste was the same. As for the texture on the inside, the two loaves seemed quite similar. I cut the loaves differently (the oven-baked loaf was for my go-to breakfast and the crock pot loaf was for a picnic sandwich), but you can still see the similarity in crumb. 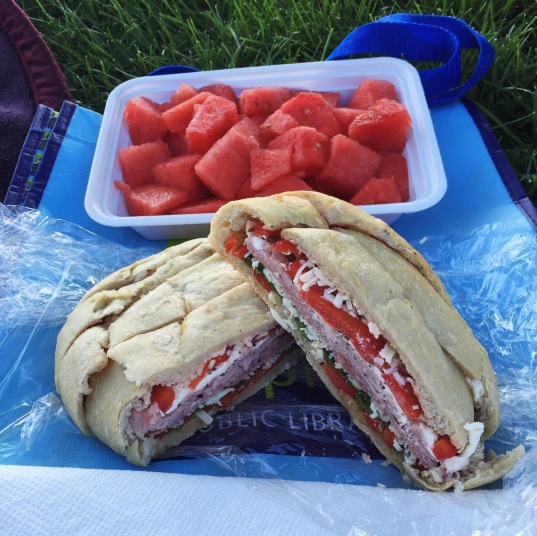 For the picnic sandwich, I looked at this recipe for guidance but used whatever I already had in the fridge. Here’s how I assembled mine:

1. I Cut off the top of my loaf, pulled out the inside of the bread (I’ll tell you what I used that part of the bread for later!), and brushed olive oil along the inside.
2. Then I placed multiple layers of raw red bell pepper, spinach, mozzarella, basil, salami, ham, and cream cheese inside.
3. Lastly, I put the top of the bread loaf back on, wrapped the whole thing tightly in plastic wrap, and let it sit in the fridge weighed down with a full yogurt container for a few hours.

I sliced the sandwich before we left for our picnic and grabbed some watermelon and pretzels, and then we were off to enjoy our tasty picnic.

We had a really relaxing time with a great view. Lillian enjoyed looking at the water and playing with daddy in the shade of a nice big tree, and I tried my best not to eat the entire picnic loaf!

What are your favorite picnic foods? Have you tried any kitchen experiments lately?

7 thoughts on “An experiment and a picnic”