A couple of weeks ago, my coworkers and I decided to throw a French-themed Baby Shower for our friend Caitlin. I am so excited to share pictures from the shower with you! 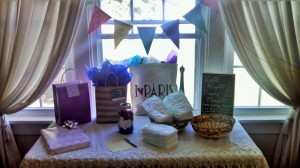 First off, here is a picture of the gift table. (Can you see that awesome I ❤ Paris bag one of my coworkers made? It turned out so great!)

I made a bunting for the gift table that said “Merci.” 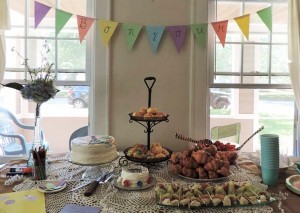 I also made bunting that said, “Bonjour” to go above the food table.  To eat, we had cream puffs, skewers with melon, prosciutto, fresh mozzarella and pepper, chicken salad-stuffed croissants, mojito fruit salad, a big chicken, bacon and egg salad, and a red velvet cake.

There were three different fillings for the cream puffs: white chocolate, French vanilla and cheesecake. I tried to make the colors red, white and blue for the French flag, but they turned out to be a bit more pink, white and teal. We tried to pretend the colors were to represent our curiosity about whether Caitlin would have a boy or a girl instead (nice way to improvise right?). 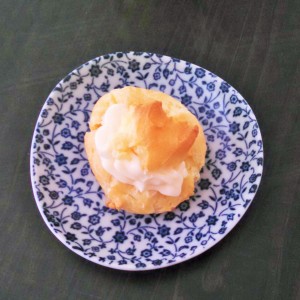 I thought this cream puff top looked like a heart, so we saved it especially for the momma-to-be.

Is this cake not beautiful!? My friend Amanda hand-painted the cake after making it herself. Magnifique!

Amanda also made this smaller cake to go with the bigger one with the Eiffel tower. Caitlin and her husband Chris decided to save the little cake for after the baby was born.

After admiring the cake and the rest of the beautiful spread, we began to eat. It was at that time I was explaining the flavors of the cream puffs and decided to STICK MY ARM IN THE EIFFEL TOWER.

Talk about embarrassing. I was laughing, but trust me, my heart hurt at the thought of even the slightest smudge in the cake Amanda painstakingly made for HOURS. I decided we should get the cake far away from me and have someone responsible cut a few slices out.

Amanda did the honors…

…and the inside of the cake was pretty, too (and delicious!).

As a sort of guest “book,” I drew a little baby wrapped up in a blanket hanging from a few patterned balloon cutouts I made. I wrote “bonjour bébé” on the side of the baby bundle. Then I put a Winnie the Pooh quote at the bottom: “A great adventure is about to begin.” I cut out a bunch of balloons in the same colors as the buntings I made, and then put them in a dish with a marker, glue and instructions nearby. The instructions asked each guest to sign their name with a little message before gluing on the balloon and “attaching” it by drawing on a string.

I think it turned out pretty cute, especially once everyone had added their balloons!

Since it was a coed baby shower, I tried to think of games to play that weren’t too cheesy or girly. On the gift table I set up two baskets, one filled with diapers and one empty. Guests wrote out jokes or other thoughts for Caitlin and her husband to keep them entertained during late-night diaper changes, and then put the diapers in the other basket. I also got M&M’s to do a guessing game (our friend Natalie was kind enough to count them as she arranged them by color to resemble the French flag–there were over 600!).

Lastly, we asked Caitlin for an ultrasound we could use to “Pin the Beret on the Bébé.” We had a lot of fun with this!

Here’s Caitlin having a go–she got really close!

I just love this picture of Caitlin laughing while our friend and coworker Dona tried the game!

This one is nice, too!

We also got some really fun pictures of Caitlin opening some of the gifts. Above, you can see that she got a Madeline collection! 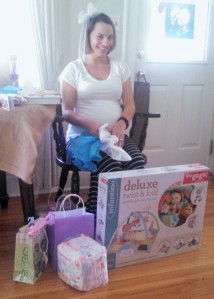 Lastly, above you can see the pretty invitation Amanda made for the shower (click on it for a larger view). I edited out my address, but you can still get the idea of how fabulous it looked! We have a talented group of friends and coworkers, that’s for sure. The shower would not have been nearly as beautiful and fun without them.

Above is a picture of some of the ladies at the shower with Caitlin in the middle. We had tons of fun celebrating with Caitlin, and were super excited last Tuesday when she finally gave birth to a beautiful baby girl. Félicitations!

It may still be cold, but I’ve been finding bits of springtime (or creating bits of it!) all around me 🙂 Firstly, I’ve been spying it outdoors…

Is that water? Oh my gosh, that’s water! THE ICE IS MELTING in Grand Haven! HURRAH!

This ice was melting from the inside out, creating a little cave! 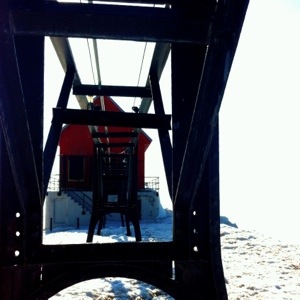 Secondly, I’ve been creating a springtime atmosphere to “spy” indoors…!

Nothing like whipping up some Lemon Poppy Seed Scones for a nice spring day. I made my first-ever batch with a nice (cute!) mug of coffee nearby.

The recipe said to cut the scones into twelve triangles, but I chose to cut the twelve in half again because they were so big. The scones were fantastic!

I may not be able to start a garden just yet, but I was able to make a cute radish needle felting craft with one of my Whimsey Box kits. I had never heard of needle felting before, but now I’m in love with it. I can’t wait to show you a tutorial featuring the other needle felt cutie I made!

There was invigorating spring lemon scent in another of my Whimsey Box kits: homemade lotion and hand scrub. 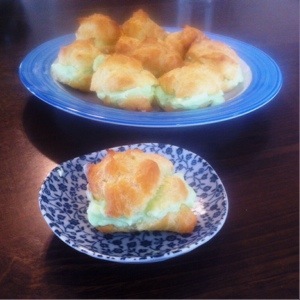 The cream puffs were yummy, too, so I decided it would be best to get them out of the house and bring them to work 🙂

Where have you spied spring?