It seems like just yesterday I was posting my Summer Bucket List for this year, and yet here we are a little ways into autumn and I’m back with my Fall Bucket List. I have had so many posts in mind for you, but things have been busy–especially with our now 8 month old girl (yeah, what!? where does the time go?)–and I just haven’t gotten to them yet. Hopefully today’s effort is a sign of getting back on track! 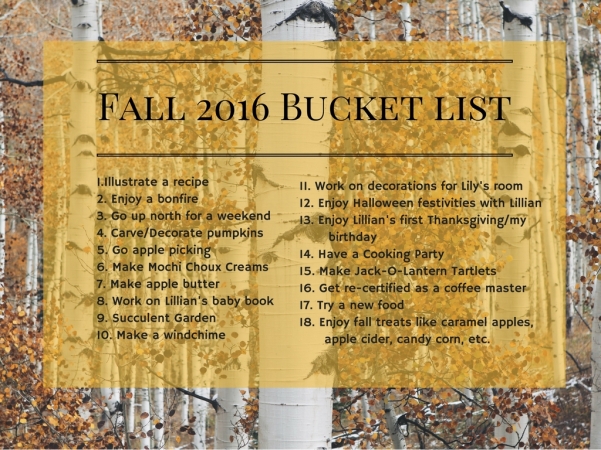 I’ve already gotten started on some of the things on this year’s list. If you follow me at all on Instagram, you may have seen that we had an awesome little trip to Traverse City this past weekend, and that we’ve also done some apple picking. I’ve already made my tried and true apple butter as well, but I think I’ll be making another batch soon (I’d like to try and make a new and improved version of this apple butter roll cake, as well as some apple butter cinnamon rolls!). As for other fall treats, I’ve been longing to eat a caramel apple, but in the meantime I’ve had way too many handfuls of candy corn and peanuts!

I’m looking forward to crossing more things of this year’s list, and would love to hear about some of the fun things you’ve got planned! Leave a comment below with some of your top fall to-do’s!

Happy Monday! After a weekend of being sick, I managed to get my haircut and attend an hour workshop and not a whole lot else. I was really worried today was going to be a terrible start to the week after a very restless night (runny/stuffy nose, sore throat, being uncomfortable from my changing body, having to pee all the time…), but it was a surprisingly good day at work. At the moment I’m waiting for some rice to finish in our rice cooker so we can enjoy some takoraisu for dinner, so I thought I’d show you the needle felts I finished over the last week or so while I wait!

The last needle felting I did was a while ago: a little bee, and a bit before that a cute little onigiri. Both of those were not kits, but the ones I chose for Halloween this year were! I think there are some pros and cons to choosing kits rather than making things on your own, so I’ll tell you about the kits I got!

First of all, these were both purchased at a 100 yen shop. That’s right: for 200 yen total (less than $2), I got several hours of stabbing fun. Included in each kit was a needle, assorted felt for the project, eye parts, a round jump ring and a ball chain . Things I needed to prepare were glue, scissors, and a mat to work with (the kit also suggested an awl for poking holes for the eyes, pliers to insert them, and a ruler, but I just poked holes with my needle and inserted the eyes by hand. I also didn’t measure anything, but in retrospect probably should have!).

I was a little disappointed my bear and ghost didn’t turn out as cute as the ones in the pictures, but I think part of that can be chalked up to lack of experience, part to not having the natural Japanese talent for making everything ridiculously cute, and part to not measuring *ehem, ehem* I was also a bit frustrated at having a limited amount of felt–I wanted to make my bear fatter (and thus cuter), but ran out of brown felt, and I wanted to cover the ghost with more of the black so less white showed through, but ran out of the black felt.

Something cool I forgot to mention is that each kit came with a “recipe” written in both Japanese and English. This would be awesome if you were trying to study Japanese, and in my case (since I have been really naughty and haven’t studied at all lately) if you just want the English.

I think if you just want to try needle felting, a nice cheap kit like the cuties I got are a good way to go. Plus, once you’ve got a needle, all you really need is felt, a styrofoam mat and your imagination and you can do quite a lot!

Well, dinner is calling! Hope you have a nice start to your week, too!
xx Caitlyn

Happy Tuesday everyone! I had a super busy weekend in Kansai, which included a lovely Saturday in Kyoto and a baby shower in the Osaka area on Sunday (you can see a few pictures on instagram). We spent yesterday back in Tokyo, and although I was bummed to come back at first, it was a good thing I got some rest as I’m feeling kind of crummy today. One the bright side, tomorrow is my next doctor appointment, so I’ll get to see our sweet baby again! And speaking of baby, some of my Fall Bucket List this year is all about preparation for when she joins us this January. 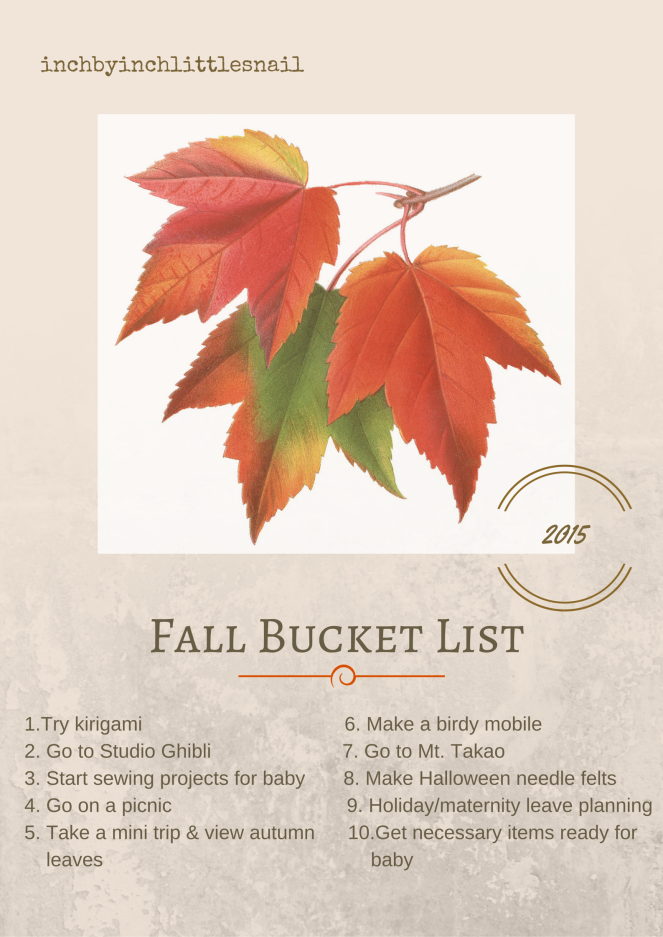 You might notice this year’s list is a bit shorter than years past, but that’s mainly because in the past I baked a lot (still no oven in our apartment *cries*), went to events in Michigan (like the Detroit Beer Festival), or did Michigan-related outdoors things (like apple picking!). Also, some of this year’s list will actually take a lot more time, such as planning for the holidays and maternity leave! Should be fun working through this year’s autumn list.

What do you have going this fall?
xx Caitlyn

I can’t believe fall is already here. Time is passing so quickly that I’ve already gotten a start on my autumn bucket list. I am really looking forward to sharing some of the items I’ve been ticking off the list with you, but first: the list! 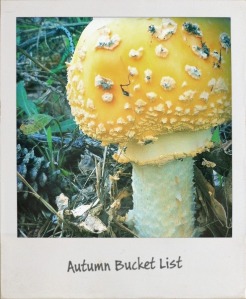