Okay, I know what you’re thinking: this girl’s crazy. But I’m not talking bath salts in a drug-induced, face-eating way. I’m talking about bath salts used the way they’re supposed to be used: in a bath!

You see, I came across a series of bath salts called “Tabi no Yado” at the drug store the other day that I decided to give a try. The theme of the series is to feel like you’re taking a journey to several hot springs in Japan by trying out the 13 included sachets of salt in your own bathtub. This, to me, sounded awesome. After all, I was never super huge on visiting hot springs or public baths in Japan (though Chad is practically obsessed). Whereas at the public bath I often feel self-conscious at generally being the only foreigner (and at the custom of being completely naked, no less), at home I can just relax and enjoy myself (and also listen to a podcast!).

There are four different packs in the Tabi no Yado series, and I chose the one pictured above. I primarily chose it because I thought the picture was cool, but it also said “shittori,” which means moisturizing, so I thought that sounded nice as well.

So far I’ve only tried the yuwaza packet, meant to imitate yuwaza hot springs in Niigata (packet pictured below), which was a “milky” type bath salt that smelled subtly of cherry blossoms. While some of the other salts included in the box should produce vibrant colors, this packet just made the water cloudy in a rather dreamy, relaxing way. The scent wasn’t too overwhelming, and I felt so nice during and after! I had to ask myself why I don’t take the time to relax in a bath more often! 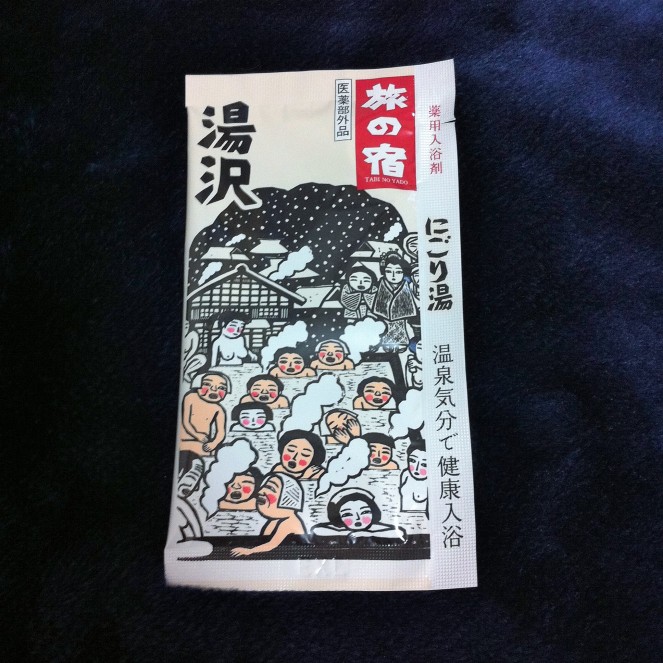 I know that I’ll definitely continue to “travel” around Japan with my Tabi no Yado bath salts, and that I’ll be trying other types in the future, too. What are your favorite ways to treat yourself at home in a spa-like fashion?