When you find out you’re pregnant in Japan, one of the first things you’ll want to do is “shop around” for hospitals. Despite living in Tokyo, where you might assume there is loads of information on this process available in English, I actually had a difficult time finding out much about hospitals at all. (I will say, however, that had I learned about the Tokyo Pregnancy Group earlier on, I could’ve gotten loads of advice from other pregnant ladies in the city.) After trying my best to inform myself on a good hospital, I ended up choosing St. Luke’s International Hospital, which is known for being an excellent hospital with great English accessibility. It’s also known for being expensive, but at my first appointment a nurse told me the due amount at birth would be around 90000 yen (somewhere near $900 USD) and I thought that sounded super reasonable. As I mentioned before, St. Luke’s doesn’t offer epidurals unless there is a case of severe pain or other extraneous circumstances, but the quality of the hospital seemed to outweigh my lack of a choice in the matter. No English documents about the price were ever provided to me, so I went along merrily at St. Luke’s until I was about 37 weeks pregnant.

Then came the day in which we got a big shock: when we went to book our room at St. Luke’s, we were told the price before government assistance after birth would be 1200000 yen (over $10,000 USD). It seemed the nurse who I talked to when I first chose St. Luke’s made a serious error in her English. We were speechless, and after leaving the appointment decided immediately that we needed to transfer to a different hospital. Over the next day and a half we were on an incredibly stressful and difficult mission to change hospitals.

One choice was to go to Toshima Hospital, but the staff said we would need an interpreter to be with us during the entire labor and delivery. This started the process of calling several translation services, but there are no interpreters available on-call. Additionally, we couldn’t find interpreter services that were medical-related (they were all for business). Toshima Hospital’s staff also said that my husband would have to be fluent in Japanese in order to be in the room during labor and delivery (which he’s not). The positive side of Toshima Hospital would be that after government assistance, the entire fee would be covered. Our boss kindly offered to attend as an interpreter, but we didn’t know when I would go into labor, how long it would be, etc., so that–in addition to the unfriendliness toward non-Japanese speakers–led us not to choose Toshima. (Note: Had we chosen Toshima to begin with, the conditions given may not have been the case, and they may have also allowed us to use a telephone translation service like Himawari. Either way, it was important to me to be able to communicate with relative ease in English throughout my pregnancy, so it is unlikely we ever would have chosen Toshima Hospital.)

Another choice we were given was to go to St. Luke’s Birth Clinic, which is connected to the hospital, but significantly cheaper. However, we were warned that 1 out of 3 women are transferred to the International Hospital from the clinic and then have to pay the hospital fee anyway. Reasons for transfer could be as small as needing an episiotomy (which I did, in the end). The possibility of being transferred to the main hospital seemed risky to us, so we decided to keep looking.

Ultimately, after getting loads of helpful advice from some friends and from the ladies in the Tokyo Pregnancy Group, we decided to transfer to Aiiku Hospital. We were very lucky the hospital accepted us as it is generally very difficult to transfer (hospitals in Japan require “booking” early in pregnancy and are super reluctant to accept patients later on in pregnancy).  I cannot express how rough the hospital search and transition was, but on the bright side, our overall experience at Aiiku Hospital was positive. In my next post, I’ll be writing more about my experience with Aiiku in general, but for now I wanted to provide an infographic that compares some basic information about St. Luke’s International Hospital and Aiiku Hospital. 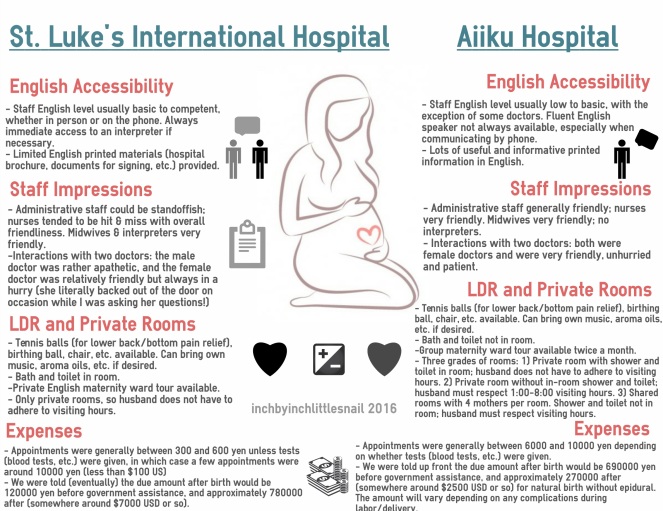 If you’re a reader who has gone to either hospital, please keep in mind that I am writing about my experiences, and that I understand others may have had a totally different experience. One of my biggest goals is just to make my experience available to women who are in the situation I was in months ago, or to share with others what it was like being pregnant in Japan. I hope this post is helpful!

We are so happy to announce the birth of our sweet Lillian Marie Dykehouse! 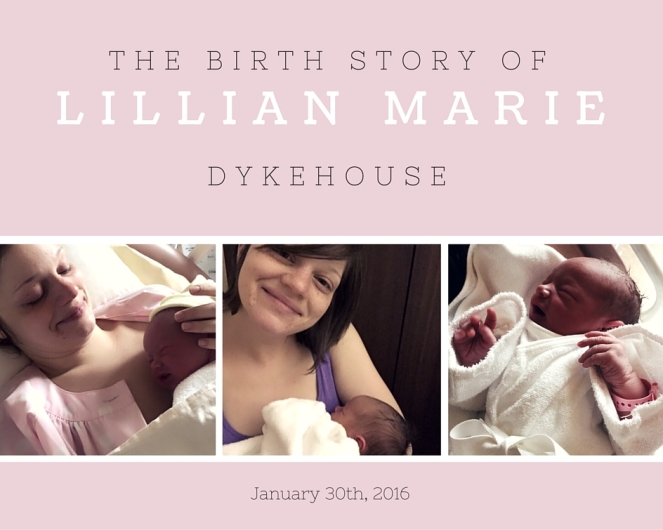 Technically after delivery you can stay in the LDR for a couple of hours, but I think we ended up staying a little longer. I didn’t question our extra time because I was very glad for it. I had a little lunch and Chad snacked on a granola bar and canned coffee (the hospital restaurant was strangely closed), and after a while we made the transition to what would be my room for the next five days. Then, our journey as parents begun!
.
I’ve always had a respect for other mothers, but after experiencing childbirth myself I am even more blown away by the awesomeness of the human body. I have had some medical hurdles to overcome before, but nothing compares to the challenge of childbirth (and of course, nothing has come with such a sweet reward!).

Lillian’s first day at home from the hospital
.
I hope you’ve enjoyed the story of Lily’s birth, and that if you’re pregnant (especially in Japan!) it has helped you or encouraged you in some way. More to come soon about my hospital experiences before and after birth!
xx Caitlyn
.
P.S. Lillian was born on National Croissant Day! Who would’ve thought after my last post  that I’d be given yet another reason to love croissants?