Ever since I saw this post on how to make matcha donuts, I’ve been begging Chad to get some. (We have a crappy convectional oven that makes me angry every time I bake, so I’ve banned myself from baking until we come home to the states and have a real oven!) Yesterday I had to take a trip to one of our campuses for work, which just so happens to have a Krispy Kreme donut shop near it! So of course, I decided I’d better get this matcha donut fix out of the way. 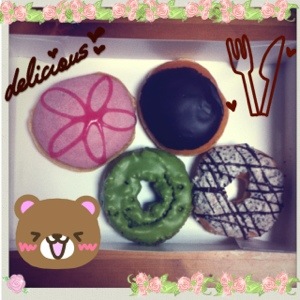 These–if nothing else–made the hour and a half trip out there worth it!

As you can see, I’ve spent way too much time this morning playing with a new app I downloaded called DecoAlbum. I really like it as it is easy to use and has a lot of cute options. Best of all, it’s free! Who says I can’t have a little Purikura (or Japanese photo-booth) magic when I move back to Michigan?

I also tried another purikura-style app called GirlsCamera, but it wasn’t as easy to navigate and kept crashing. I was particularly sad after trying to decorate a picture for nearly an hour and it crashed! The only reason I consider keeping it is because it has a frame with the phrase, “It’s a new day. I like running with scissors because it makes me feel dangerous.” Ahh, such Japanese English.

What apps have you been playing around with lately? Do the donut shops near you have any interesting flavors?