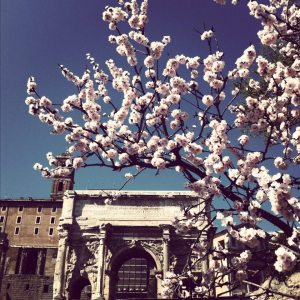 At the Roman Forum in Italy, spring 2012

In March 2012, Chad and I were fortunate enough to have an 18-day adventure through France, Italy, Spain and Holland. I gained about 15 pounds on the trip (which I thankfully lost!) because there was delicious food EVERYWHERE. I especially enjoyed eating in Rome, where we had the chance to take a cooking class. (Cooking classes are one of my favorite things to try when traveling–you get to meet other travelers from around the world, and you make delicious meals together! I blogged about a cooking class in Thailand here.) 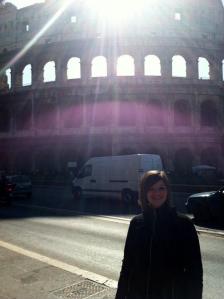 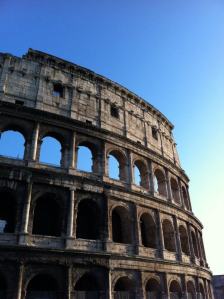 One of my favorite things we learned to make in our cooking class were Roman Style Artichokes. We started out by carving the artichokes, which is a lot harder than you might think! 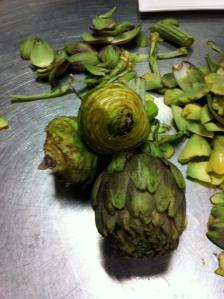 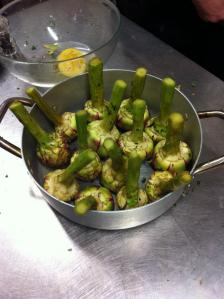 After carving the artichokes, we rubbed them with lemon and stuffed them with garlic, Roman mint, salt and pepper. Then we put them in a pot with olive oil and water and cooked them until they were tender. 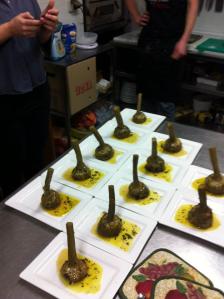 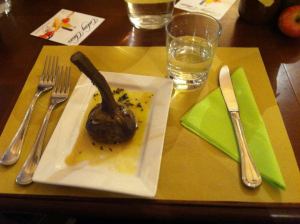 Believe it or not, before taking the Cooking Class in Rome, I had never tried artichokes (aside from in Spinach Artichoke Dip). I was very excited about trying a new food, and remembered our trip fondly today when I decided to try artichokes in a new way for dinner tonight: I made Creamy Spinach and Artichoke Soup! 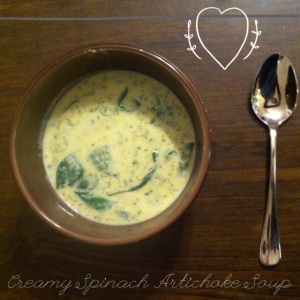 The soup has a very unique flavor–the lemon juice and dill gives it some tang, and almost reminds you of spring. Adding a fair amount of Parmesan cheese before eating will add a great deal to the flavor and calm down the citrus if it seems a bit strong. I got the recipe out of a fabulous cookbook called Eating Well Serves Two. I used the cookbook a lot while in Japan and always appreciated the variety and healthfulness of the easy-to-make meals. If you’d like to give this Greek soup a try, find the recipe below.

2-3 tablespoons lemon juice, to taste (I might only do 2 next time!)

1 1/2 tablespoons chopped fresh dill (I might actually go slightly lighter on the dill, too)

1. Bring broth and rice to a boil in a large saucepan over high heat. Reduce heat to a simmer and cook, uncovered, until the rice is very tender, about 15 minutes (since I used whole grain rice, it took about twice as long). Stir in spinach.

2. Place artichoke hearts, eggs and lemon juice in blender; cover and puree. With motor running, ladle about half of the rice mixture into the blender and puree until smooth. (Use caution when pureeing hot liquids). Return the pureed mixture to the pan and cook, stirring constantly, until an instant-read thermometer registers 160 degrees F, reducing the heat as necessary to prevent the soup from boiling. (I didn’t have a thermometer, so I just cooked it for a while until it got frothy while stirring.) Stir in dill and pepper.

One thought on “Artichokes and Italy”